Gifts That Keep On Giving

Before we launched onto this enterprise, I did a lot of reading in an attempt to understand, or at least begin to understand, just what we were getting into. One factor that was often discussed was money. In many respects you save money by not having to buy produce, through recycling materials in the most creative ways and, definitely in my case, saving money by not needing a gym membership. You also spend money on things like too many seeds, materials you just can’t find no matter how many skips you look in, and, if you’re anything like me, books.

However, there’s one financial aspect that was never discussed in any books; gift giving. I suppose it can’t be counted on or predicted in any way, as it depends so much on the kind of people we are surrounded by and by our own personalities. There may well be allotments out there where no one speaks to each other, everyone stuck in their own isolated world. I highly doubt it though, it just isn’t The Allotment Way.

One recent gift I recieved was through the Royal Horticultural Society’s Grow Your Own Campaign. As one of the first 10,000 supporters, I received a lovely parcel of seeds donated by Mr. Fothergill’s Seeds.  Very pleased with my gift of  sweetcorn ‘Swift’, spring onion ‘Ishikura’, summer squash ‘Sunburst’ and my favourite tomato ‘Sweet Million’. 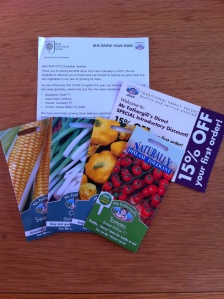 Seeds from the RHS

A couple weeks ago our onion sets arrived in the post and I diligently headed to the plot to get them in the ground while the weather was still dry. I had allotted a full bed for them, but it quickly became apparent that I had far too many for the space I had. Every other square inch has already been reserved, so I faced the dilemma of what to do with them. It was about then our plot neighbour, Tom arrived. I offered them to him, as I couldn’t bear to see them go to waste. He was very pleased with them and naturally asked me how he should plant them.

This morning Scott and I got an early start at the plot. We were soon joined by Simon and his partner Alice. Poor Simon did his back in during the week, so wasn’t able to do much other than take Alice, who hadn’t seen the plot for a few months, on a tour of our work so far. Alice also arrived bearing a gift of some asparagus crowns from her mum. Leaving us with this to plant, I had to then work out where on earth to put them.

When I opened the box, I was amazed to find three different varieties and five crowns of each! I had thought of reducing the rhubarb patch down to half and planting asparagus. However, I had been thinking this would be something to do next year, after we had a chance to see how the rhubarb performed this year.  After much waffling, I ended up digging up two of the smallest rhubarb plants and dumping them into some plastic pots. I’ve rather haphazardly planted the asparagus, far too close together I’m sure, in an odd ‘L’ shape around the remaining rhubarb. 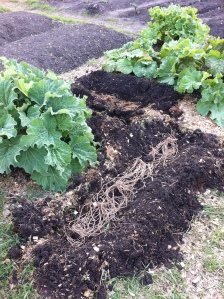 Once again Tom arrived on site just in time and my waste-not-want-not philosophy was allowed to remain intact. I admitted it wasn’t the best time to transplant them, but Tom was very happy to take them. He wanted to return these recent favours and offered some cauliflowers seedlings from his cold frame. As it’s been quite chilly lately, he said to just take them whenever I like. He also promised to bring some more seedlings from home for us to have. As someone who has really no space at home to start things, this was a most welcome gift.